Staying at home means that we have more time with our dogs. It can be hard to not feed them more treats and share our favorite foods with them. But not all human food is healthy and safe for our furry pals.

Which human foods are safe for dogs? Which foods can be toxic to dogs? What if you're stuck at home and have no dog food left, what can you give to your dog?

Read on and learn about what your dog can and can't eat.

Which human foods can harm dogs? 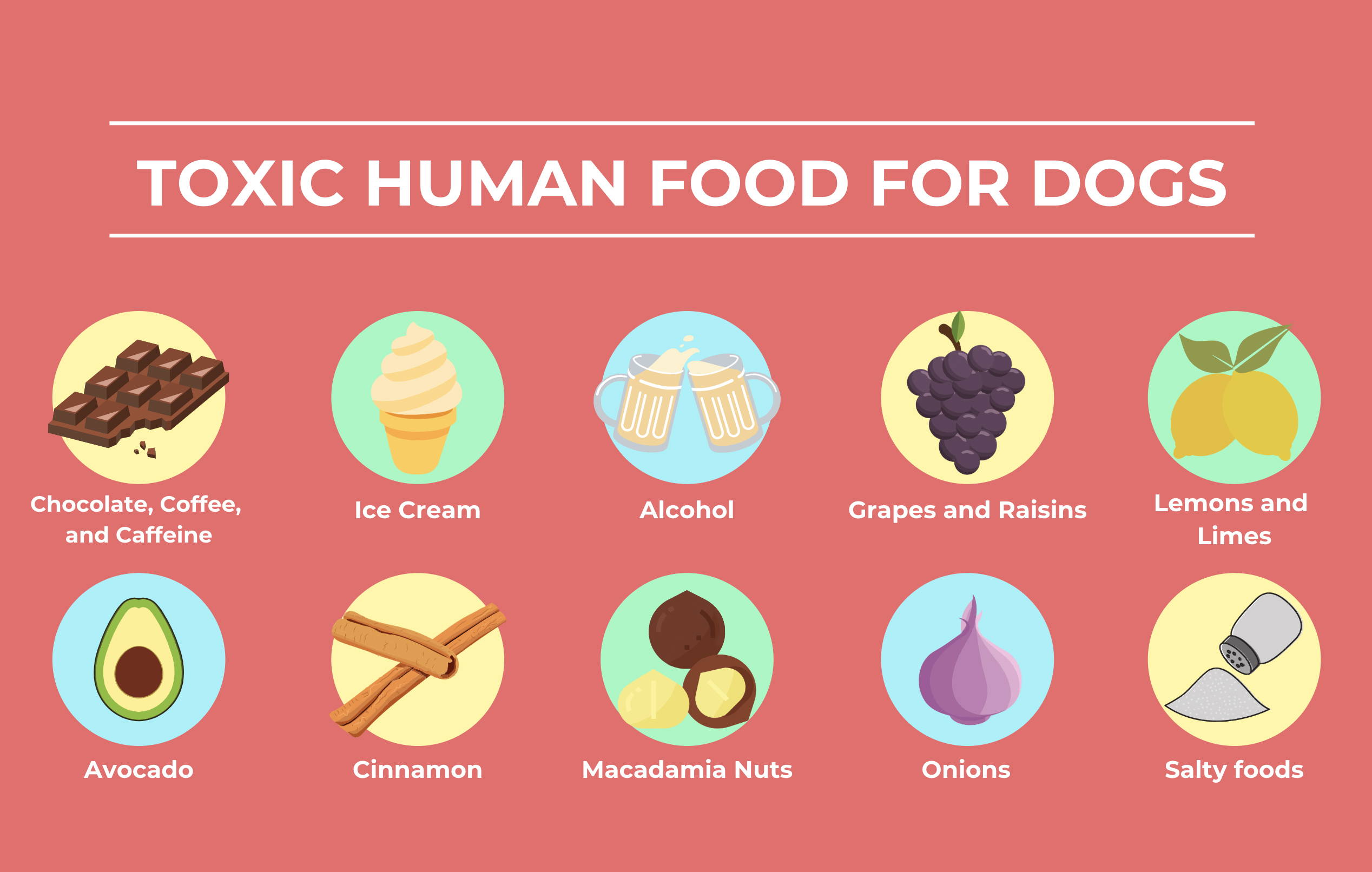 Never give chocolate, coffee, or anything containing caffeine to dogs.

These products contain chemicals called methylxanthines, which are highly toxic to dogs. The chemicals can cause vomiting, an abnormal heart rate, seizures, and even death.

Ice cream is an incredibly refreshing summer treat for us, but it contains lots of sugar and some additional ingredients that can be toxic for dogs, so it is best not to share with your dog.

Ingesting even the slightest amount of alcohol may lead to ethanol poisoning in dogs. Signs of intoxication include tiredness, lack of coordination, seizures, vomiting and diarrhea.

In severe cases, too much alcohol consumption in dogs can result in more severe symptoms, such as heart attack, lung failure, coma and even death.

Bear in mind, products that contain alcohol, such as alcoholic beverages, perfumes, mouthwash and cleaning products, should be always kept away from your dog.

Grapes and raisins contain toxic substances that are poisonous for dogs. They can potentially lead to rapid kidney failure and, in some cases, death.

Even small amounts of grapes and raisins can make your dog sick, so it’s probably best to avoid feeding them to your dog altogether.

Also, refrain from giving dogs any product that may contain these foods, such as fruit cake or malt loaf.

The skins of lemons and limes contain a substance called psoralen, which are fatal for dogs. It can lead to gastrointestinal symptoms like vomiting and diarrhea.

When ingested in very large amounts of psoralen, they appear to suffer from more severe symptoms, such as muscle tremors, difficulty walking, liver failure, and even death.

Avocados contain a substance called persin, which is toxic to dogs and can cause vomiting and diarrhea.

Persin is found in all parts of the avocado, including the fruit, pit, leaves and bark. Thus, you should always keep avocados away from your dog.

Onions contain substances called organosulfoxides, which are poisonous to dogs and may lead to vomiting, diarrhea, and stomach pain.

Organosulfoxides can also cause anemia in dogs.

Although not toxic, large amounts of cinnamon can cause vomiting, diarrhea, and liver disease in dogs.

The toxic compound in Macadamia nuts is unknown, but eating even small amounts may lead to vomiting, muscle weakness, tremors, hyperthermia and depression.

Other types of nuts can cause dogs to choke.

Too much salt can cause excessive thirst and urination in dogs, as well as sodium ion poisoning.

Symptoms of this poisoning can include: vomiting; diarrhea; involuntary shaking, or tremors; high temperature; seizures.

Which human foods can dogs eat? 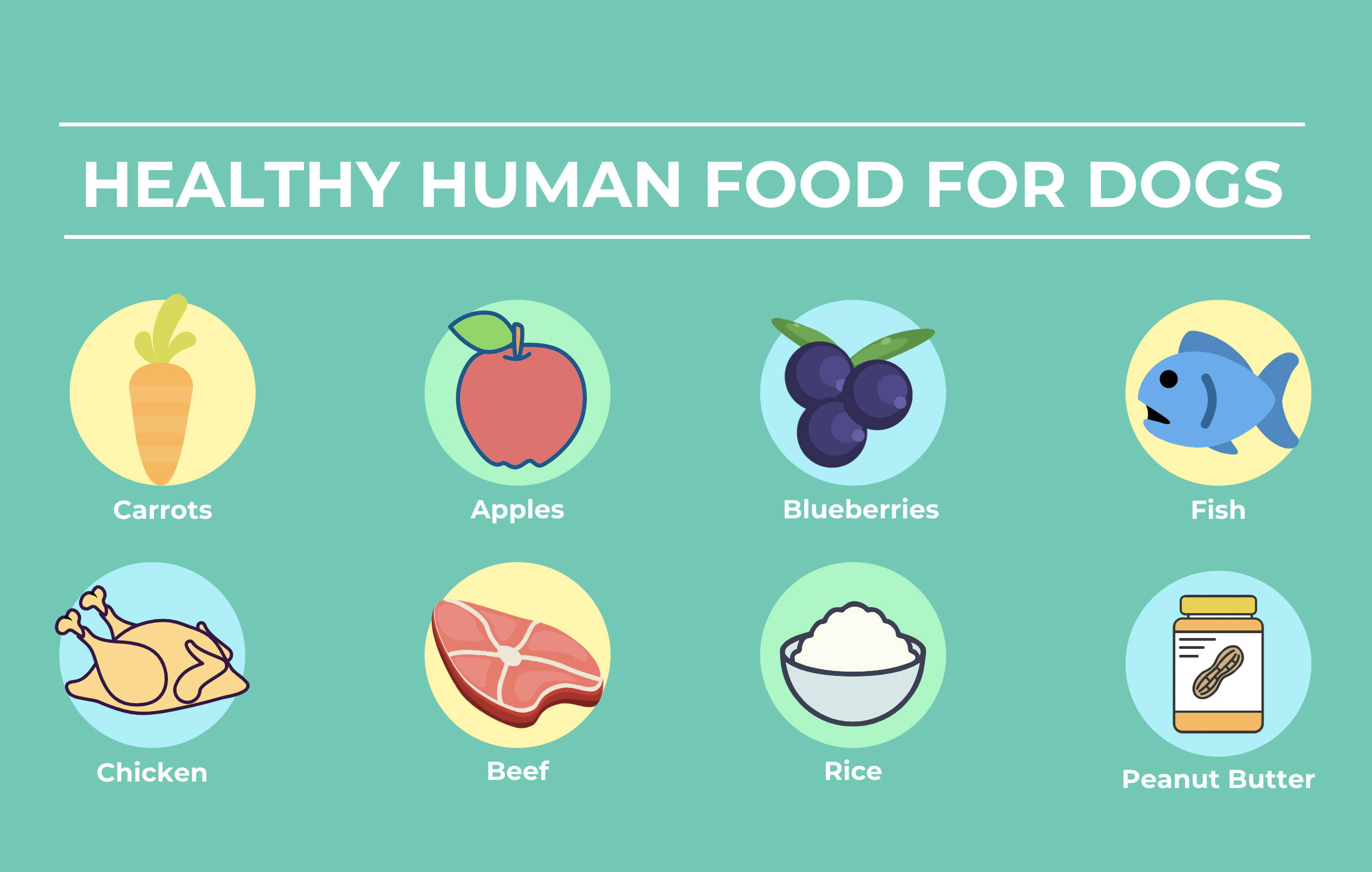 Carrots are a healthful food for dogs. Chewing on carrots can help clear plaque from their teeth. It contributes to their good dental health.

Carrots are low in calories and a good source of vitamins, minerals and fiber. This makes them very healthy food for your dog to snack on.

Apples provide many important vitamins for dogs, including vitamins A and C.

Apples are also rich in fiber, which can help regulate a dog’s digestion.

Blueberries are nutritious. This fruit is a rich source of disease-fighting antioxidants and provides a significant amount of vitamins, minerals and fiber, all of which may benefit your dog’s health.

In addition, blueberries are low in calories and small in size, making them an incredibly healthy snack for your dog.

In moderation, it's safe to share salmon, shrimp, and tuna with dogs. Protein from these foods can be greatly beneficial for dogs.

Salmon and tuna contain plenty of omega-3 fatty acids, which contribute to a healthy immune system, coat, and skin for dogs.

Shrimp is a great source of B vitamins, which can help maintain a dog’s digestive system and improve healthy blood circulation. 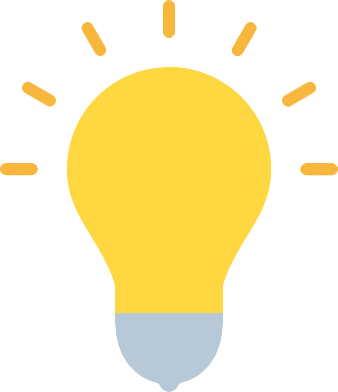 Note: Thoroughly cook fish before feeding it to a dog, as uncooked fish can contain harmful parasites.

Boiled chicken is a good option. Be sure there are no bones and seasoning, dogs can't tolerate.

Lean beef is safe and nutritious for dogs.

Yes, beef is a common ingredient in commercial dog foods. It’s a rich source of protein and contains many important vitamins and minerals.

The beef should be plain as well, as the added sauces or seasonings often contain ingredients that may be harmful to your dog, such as salt.

Plain and cooked brown or white rice is good for dogs.

Rice is easily digestible for dogs and helps relieve an upset tummy.

But white rice can cause blood sugar levels to rise, so dogs with diabetes should only eat it in small amounts.

Peanut butter can be an excellent source of protein for dogs. It contains many beneficial elements, such as heart-healthy fats, vitamins B and E, and niacin.

However, it is important to check that the peanut butter does not contain a sweetener called xylitol, which is highly harmful for dogs.

What if you're stuck at home and have no dog food left, what can you feed your dog? 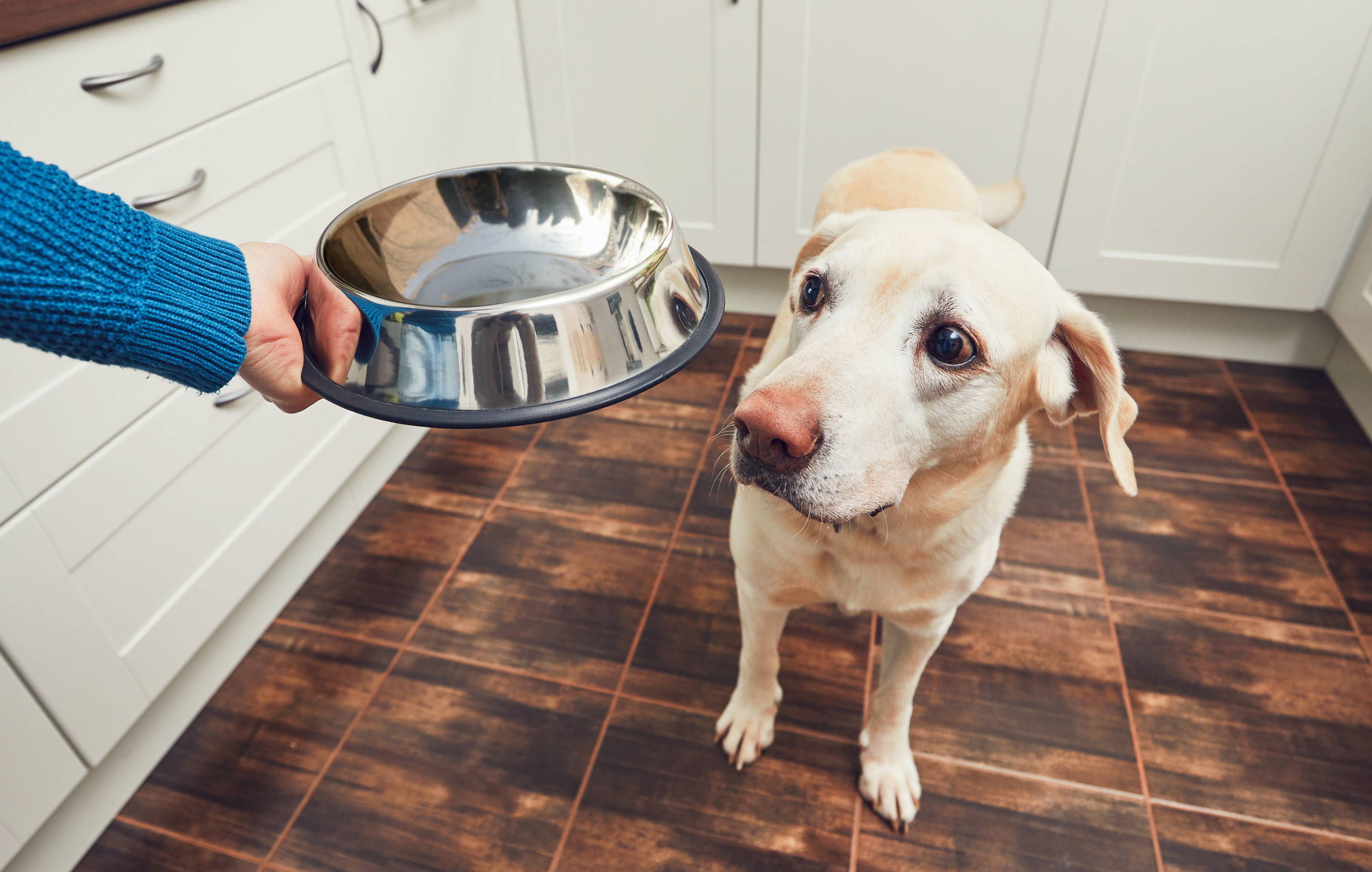 According to the Elanco Animal Health subject matter experts, most dogs can go for a short period of time eating foods generally similar to what we eat. They will tolerate and enjoy cooked rice mixed 1:1 with cooked meat (especially chicken, turkey, or hamburger).

The bottom line: Within moderation, you can swap out your pup’s regular dog food and serve them with those healthy human foods we listed above. And remember to remove any bones and excess fat, and avoid spicy foods and high-fat food.

If your dog is sensitive to dietary changes, if he has diarrhea or vomiting with changes to diet, or if he has food allergies, you should be more cautious. It’s always best to ask your veterinarian.

Be well, stay safe, and keep your furry friends healthy during the current crisis.

Stay healthy. Stay safe. Stay together with your pet.

Join our Dogness Club for tips and advice to navigate the COVID-19!

Back to Pawsitive Care Center